This page covers the basics of curve editing. Curve basics, selecting and advanced editing are covered in the following pages: 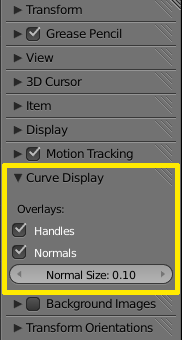 When in Edit mode, the Properties Shelf (N) contains options in the Curve Display panel for how curves are displayed in the 3D viewport.

When in Edit mode, you can hide and reveal elements from the display. This can be useful in complex models with many elements on the Screen.

Like other elements in Blender, Curve control points can be grabbed/moved (G), rotated (R) or scaled (S) as described in the Basic Transformations section. When in Edit mode, proportional editing is also available for transformation actions.

Mesh snapping also works with curve components. Both control points and their handles will be affected by snapping, except for within itself (other components of the active curve). Snapping works with 2D curves but points will be constrained to the local XY axes.

The To Sphere, Shear, Wrap and Push/Pull transform tools are described in the Transformations sections. The two other tools, Tilt and Shrink/Fatten Radius are related to Curve Extrusion.

Curve smoothing is available through the specials menu. For Bézier curves, this smoothing operation currently only smooths the positions of control points and not their tangents. End points are also constrained when smoothing.

The Mirror tool is also available, behaving exactly as with mesh vertices,

Once a curve is created you can add new segments (in fact, new control points defining new segments), either by extruding, or placing new handles with CtrlLMB

Unlike mesh editing, you cannot create a new curve inside the edited object by CtrlLMB

-clicking without any control points selected. to do so, you can cut an existing curve in two parts (by deleting a segment), copying an existing one (⇧ ShiftD), or add a new one through the menu.

This command duplicates the selected control points, along with the curve segments implicitly selected (if any). The copy is selected and placed in Grab mode, so you can move it to another place.

Two open curves can be combined into one by creating a segment between the two curves. To join two separated curves, select one end control point from each curve then press F. The two curves are joined by a segment to become a single curve.

Curves before and after joining

Additionally, you can close a curve by joining the endpoints but note that you can only join curves of the same type (i.e. Bézier with Bézier, NURBS with NURBS)

Curve objects that are made of multiple distinct curves can be separated into their own objects by selecting the desired segments and pressing P. Note, if there is only one curve in a Curve object, pressing P will create a new Curve object with no control points.

The Erase pop-up menu of curves offers you three options:

Selected
This will delete the selected control points, without breaking the curve (i.e. the adjacent points will be directly linked, joined, once the intermediary ones are deleted). Remember that NURBS order cannot be higher than its number of control points, so it might decrease when you delete some control point. Of course, when only one point remains, there is no more visible curve, and when all points are deleted, the curve itself is deleted.

Segment
This option is somewhat the opposite to the preceding one, as it will cut the curve, without removing any control points, by erasing one selected segment.
This option always removes only one segment (the last “selected” one), even when several are in the selection. So to delete all segments in your selection, you’ll have to repetitively use the same erase option…

All
As with meshes, this deletes everything in the object!

Opening and Closing a Curve

This toggles between an open curve and closed curve (Cyclic). Only curves with at least one selected control point will be closed/open. The shape of the closing segment is based on the start and end handles for Bézier curves, and as usual on adjacent control points for NURBS. The only time a handle is adjusted after closing is if the handle is an Auto one. (Open curve) and (Closed curve) is the same Bézier curve open and closed.

This action only works on the original starting control-point or the last control-point added. Deleting a segment(s) doesn’t change how the action applies; it still operates only on the starting and last control-points. This means that AltC may actually join two curves instead of closing a single curve! Remember that when a 2D curve is closed, it creates a renderable flat face.

This command will “reverse” the direction of any curve with at least one selected element (i.e. the start point will become the end one, and vice versa). This is mainly useful when using a curve as path, or using the bevel and taper options. 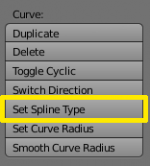 You can convert splines in a curve object between Bézier, NURBS, and Poly curves. Press T to bring up the Toolshelf. Clicking on the Set Spline Type button will allow you to select the Spline type (Poly, Bézier or NURBS).

Note, this is not a “smart” conversion, i.e. Blender does not try to keep the same shape, nor the same number of control points. For example, when converting a NURBS to a Bézier, each group of three NURBS control points become a unique Bézier one (center point and two handles).

There is also an “external” conversion, from curve to mesh, that only works in Object mode. It transforms a Curve object in a Mesh one, using the curve resolution to create edges and vertices. Note that it also keeps the faces and volumes created by closed and extruded curves.

Mesh objects that consist of a series of connected vertices can be converted into curve objects. The resulting curve will be a Poly curve type, but can be converted to have smooth segments as described above.

You can make other selected objects children of one or three control points CtrlP, as with mesh objects.

Select either 1 or 3 control points, then CtrlRMB

another object and use CtrlP to make a vertex parent.

Hooks can be added to control one or more points with other objects.

Set Goal Weight
This sets the “goal weight” of selected control points, which is used when a curve has Soft Body physics, forcing the curve to "stick" to their original positions, based on the weight.