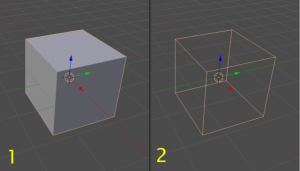 The geometry of a scene is constructed from one or more Objects: For example Lamps, Curves, Surfaces, Cameras, Meshes, and the basic objects (“primitives”) described in “Mesh Primitives”.

Each object can be moved, rotated and scaled in Object Mode (see picture). However, not all of these transformations have an effect on all objects. For example, scaling a force field will not increase its effect.

For making other changes to the geometry of editable objects, you should use Edit mode (see picture).

Once you’ve added a basic object, you remain in Object Mode. In earlier versions of Blender, you were automatically switched into Edit mode if the Object was a Mesh, a Curve or a Surface.

You can switch between Object Mode and Edit Mode by pressing ⇆ Tab.

The object’s wireframe should now appear orange. This means that the object is now selected and active (see picture Selected object).

The (Selected object) image shows both the solid view and wireframe view of the default cube. To switch between wireframe and solid view, press Z.

Move origin of the model to the place of the 3D cursor.

Move origin to calculated center of mass of model.

Joins all selected objects to one single object. Must be of the same type. Origin point is obtained from the previously active object. Performing a join is equivalent to adding new objects while in Edit mode. The non-active objects are deleted. Only the active object remains. This only works with editable objects, like meshes and curves.